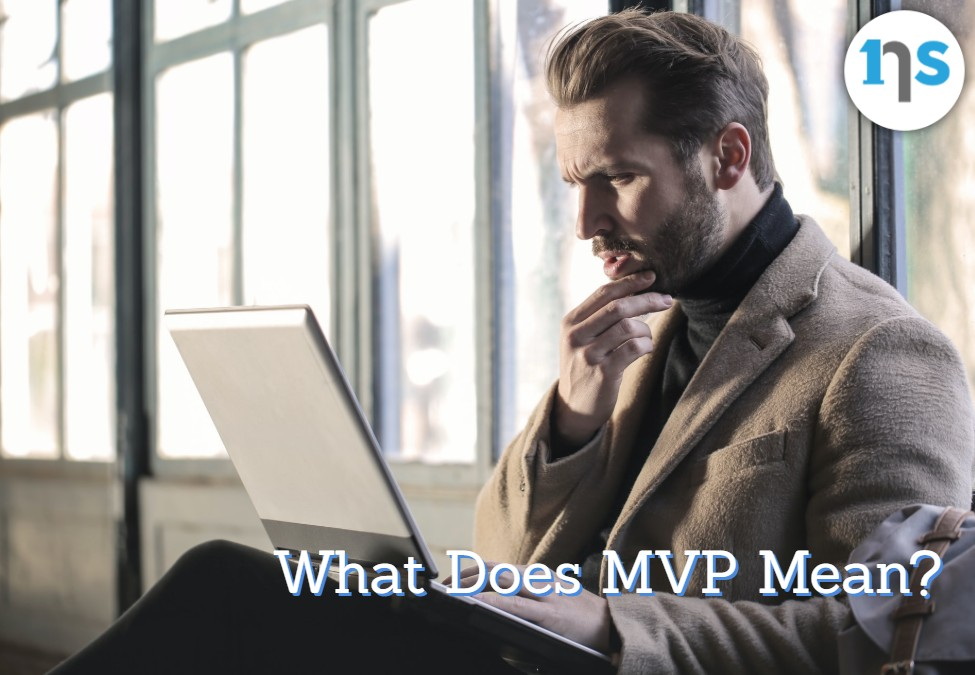 What is a Minimum Viable Product? The MVP Meaning and its Implication for Businesses

What Does MVP Mean?

Who would have guessed that when Frank Robinson created the term “minimum viable product” in 2001, it would become a “must-have” for mobile app development companies, startups, and even organizations? This concept was then popularized by Eric Ries, blogger, entrepreneur and author of the Lean Startup Methodology.

It’s for now. Because, in the age of mobile apps, knowing what your clients want from your product is critical to your survival. And that is precisely what a minimal viable product accomplishes for your company.

This review will discuss topics such as what MVP, our word of the day represents in app development and business development and how to raise the chances of building a term MVP that improves your business.

What Is the Meaning of MVP in App Development?

MVP app development has its origins in the universe of startups, which used this strategy to create a basic version of their products in order to test the waters and collect feedback from beta testers or early adopters.

Uber, Dropbox, Airbnb, Buffer, and Foursquare are just a few of the well-known applications that have launched an MVP version of their UI.

However, MVP mobile development isn’t just useful for startups. A minimal viable product approach allows a phased development process and a faster launch, which is beneficial for both business and consumer-facing mobile apps.

The MVP (minimal viable product) of a mobile app is a stripped-down iteration of the app that comprises the most essential functions. To find your MVP criterion, you’ll need to select the most significant features or functions.

You should think about the following questions as you begin the development process.

1. What are the main features of the app?
2. What drives users to download and utilize the app?
3. What features will users find the most useful?
4. Will people believe the software lacks enough features to be genuinely useful?
5. What sets your MVP software apart from the competition?

For any kind of app, whether it’s an enterprise app for internal usage within a company or a consumer-facing software that will be publicly promoted in app stores, a minimum viable product should be established.

What Is the Meaning of MVP Meaning in Business?

The most basic form of the product that a firm wants to put on the market is known as the MVP minimum viable product not to be confused with most valuable player also MVP. It could be a car, computer, smart television, or website.

Companies seek to assess the response from prospective customers by offering the simplest version of a new product. This strategy assists them in developing a far superior end product. The marketing or research team will be able to determine where the product is deficient, as well as its merits and flaws, using the MVP product idea.

A minimum viable product has three distinguishing characteristics. One is that it will have sufficient features to entice customers to buy the product. As a result, it becomes easier for the company to advertise the product. The other is that it will feature a feedback system via which consumers can provide thoughts on the product.

Finally, it should provide sufficient long-term benefits to consumers who are the first to use the product. For instance, Google offered a free upgrade of its operating system to all Nexus users.

Let’s look at an example to help us grasp the concept. MVP is a prominent idea in the online world, where a website is created with minimum capabilities to see how the user base react to the product shown on the site.

It might be a consumable item, a daily usage item, or even the website provider’s service. The goal is to start small and listen to what people say about what they want from the product.

The Difference Between Prototype and MVP 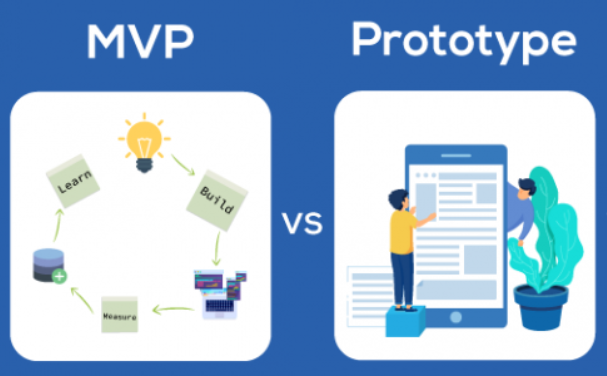 What is a Prototype? 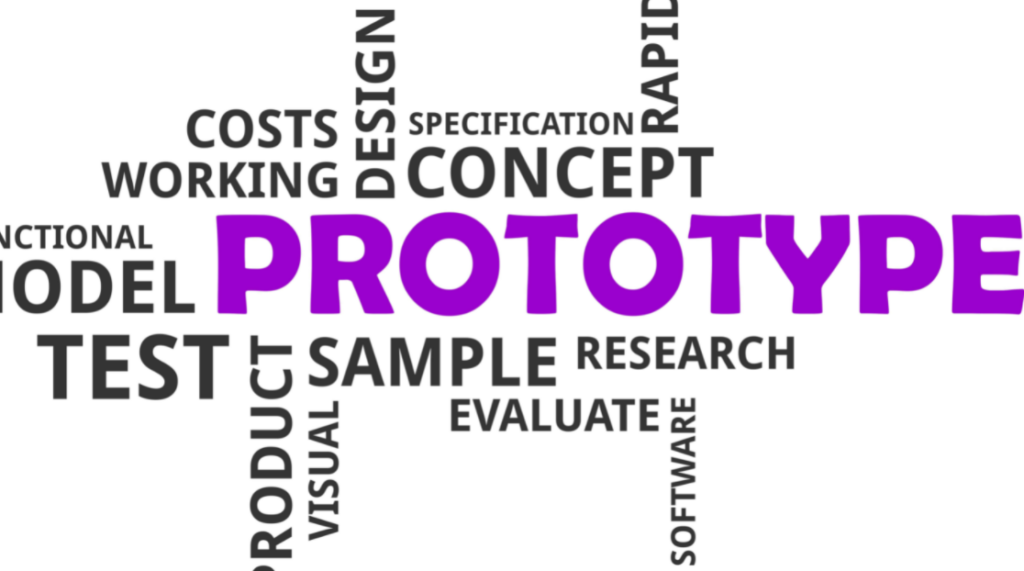 When you have a product concept, you must first determine if it will work. Before moving on with further software development, a product prototype is one of the quickest and cheapest choices. You can visualize how your future product will work and what it might look like.

As a result, a prototype in its initial stages is a relatively basic version of a future project. Simply put, a prototype is a sketch that you present to financiers to demonstrate to them that your concept is alive and well. Why should you present it to them? Because the prototype’s performance is easier to grasp for investors than the technical paperwork.

A prototype’s primary objective is to be tested. Your early adopters and sponsors do this work. Making a prototype helps to acquire a sense of how potential consumers will interact with your future physical or digital product before it is released.

What is an MVP?

As illustrated above, an MVP (abbreviation for minimum viable product) is the most basic form of a product that a business wishes to introduce in the market. It could be a computer, TV, vehicle, or website.

So What’s the Difference Between These Two?

It’s critical to recognize that MVPs and prototypes have different purposes and should be used in different phases of product development. This contributes to the fundamental difference between these two strategies.

Prototypes are used for presentations and user testing in the initial stages of startup product development. The product lifecycle ends once you’ve completed the prototype confirmation and acquired some cash for the establishment of a minimal viable product.

Most importantly, beta testers and stakeholders provide vital input. You modify the prototype and try again if the feedback you get is negative. Then you should draw a conclusion from the findings collected throughout the prototype creation process.

The main objective is to develop a technical brief and review it with development teams to decide how to proceed with app development and MVP development.

You must adjust your development style after the first critical round of validation. Using the knowledge gained in the previous stage, you can now build and test an MVP.

In addition, you now proceed to a new development paradigm: from fast sketch coding to a product creation that the first consumers will witness.

So, the prototype should be utilized from the beginning to verify assumptions and demonstrate the viability of your concept to prospective investors. This way, you can convince the financiers that your project is worth pursuing and that they can confidently invest in you.

To test your business concept for efficiency and gain feedback from the community, adopt an MVP strategy. By doing so, you will be able to procure adequate funds and then roll out the product to the broader market. Even if it turns out that developing your concept further is not worthwhile, you can stop at any point without wasting a lot of money or time.

As a result, the question of whether to use a minimum viable product or a prototype to validate your company idea is inappropriate because both strategies can easily be combined.

How to Build a Minimum Viable Product

Ideas don’t always meet the market’s requirements. Before starting the MVP development process, a company should make sure that the idea meets the demands of the intended users.

What is the new product’s value to its real users? Why would people purchase the product? The answers to these questions can help determine the app’s value proposition.

The design stage of the MVP is crucial. Design the app in a user-friendly way. The company must consider the app from the user’s point of view, from the first time they use it until the final procedure, such as completing a purchase or receiving a delivery.

Prioritize all the aspects the MVP concept will cover. To help you prioritize the MVP features, ask questions like: What do the users want? Is this product going to be useful to them?

The MVP can be developed once a company has agreed on the essential feature set and learned about the market need. Keep in mind that an MVP is not a lower-quality version of the final product; it must still meet the consumer’s demands. As a result, it must be appealing, appropriate, and simple to use on the users’ part.

The initial testing stage is carried out by Quality Assurance engineers, who work to enhance the quality of the product even if it is not yet launched.

After launching the MVP, go through everything again. The company must get feedback from its customers on the release. They can assess the acceptance and viability of their product in the market based on the comments.

Brian Chesky and Joe Gebbia were housemates and former classmates in 2007. To establish their business, they relocated to San Francisco, but they couldn’t come up with the rent of their San Francisco loft apartment.

What was their solution? They made their flat accessible to delegates of a local design conference as an inexpensive place to stay. This not only fixed their rent issue, but it also solved the problem of guests who hadn’t been lucky with hotel reservations.

They soon realized there was a market for this, so they developed an MVP to test their ideas and show that people would be willing to use their product.

Amazon is perhaps the most successful MVP in the world. When Jeff Bezos watched the rise of the internet in the early 1990s, he came up with the idea of selling books online.

He quit his investment banking position, moved back in with his parents, and developed an MVP in the format of a basic website.

In May of 2003, LinkedIn debuted its MVP. User profiles, the capacity to search for other users, and sending email requests to people were all fundamental functions. You could only submit requests to someone if you knew their email address initially, which is still an option today.

Music streaming has become the norm in recent years, but it wasn’t always so. There weren’t many music streaming services in 2006, and the ones available were nothing short of terrible.

Daniel Ek, the co-founder, and his team began their MVP process by asking themselves a few questions: What would be their driving metric? When You press play, how long should it take for the music to play? It should begin playing immediately and continue seamlessly.

Once they’d developed a basic minimum viable product, they started testing it on themselves, family, and friends. It was a massive success, so they decided to extend the test release to prominent music bloggers in Sweden.

Garrett Camp and Travis Kalanick were just two guys with an idea back in 2008. What was the issue they were trying to address? The cost of hiring black cars. They developed a basic, rapid, and low-budget MVP to test a simple theory.

The objective of an MVP is to excite and attract consumers, as well as starting dialogues about what your product could accomplish next. Your MVP must demonstrate that users require your product and will embrace it. After you’ve confirmed your assumptions, you can use that validated learning to design a better product.