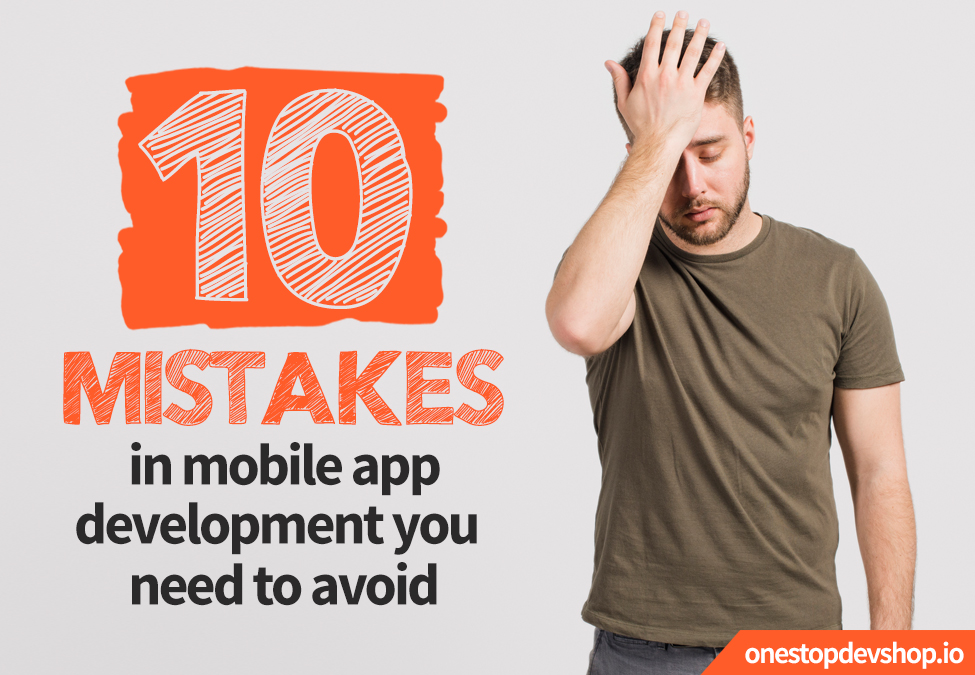 10 Mistakes in Mobile Application Development You Need to Avoid

In recent years, "mobile application" has become a common term. Most people do not really understand what it means, or what it takes to develop a mobile app. Mobile application development is a process that involves the creation of new software applications that are suitable for running on mobile devices. A normal mobile app uses a network connection to enable it to run with remote computing.

In this smartphone era, 90% of people own smartphones and mobile apps are a way of life for most. There are mobile applications for literally everything, and thousands of apps launch every day in app stores. Competition in the mobile application development world is so high, that companies choose to focus on decisions concerning the type of apps that are beneficial to their clientele.

As a mobile application developer, you must avoid some mistakes like the plague! These include:

1. Not Having a Solid Plan

From the word go, most companies do not have a solid plan of how they intend to reach their goals. They instead focus more on the prize, rather than map out a path towards the prize. The lack of a plan makes them miss out on the nitty gritties of important hows, whys, and whats. How is the mobile app better than the competition? Why is the app being developed? Why this app over others? What is your target audience?

2. Do Not Take Shortcuts!

Whatever you do, please do not take shortcuts! It takes hundreds of hours and tons of codes to develop a single interface of a mobile application. After developing the initial interface, some developers tend to fall into the shortcut trap. They copy-paste the entire code and change bits here and there as required. Some developers copy-paste some elements from similar mobile applications to theirs. After doing this, they cross their fingers that the app will work as well as the original app.

The danger in doing this copy-paste is that it leaves too many gaps for bugs to invade and destroy the app as soon as it hits the app market. When bugs strike, you are in a whole lot of trouble since you copy-pasted and have no idea what the code is. This means you have zero chances of locating and fixing the bug. This translates into a total waste of your client’s time and money! It may be time-consuming, but it is not only safer to write your own code, but it is also the right thing to do.

3. Do Not Develop for Multiple Platforms

A proper plan in the first place when developing a mobile app means you will avoid the mistake of developing for multiple platforms. Nowadays, one platform is as popular as the next, and most companies do not know how to identify the right platform. The result of this indecisiveness is the development of multiple platforms at a go. Analyzing this the market trend and requirement can help companies avoid this duplication. For example, if you intend the mobile app to reach a wider audience, it would be wiser to build the app on Android, as globally, its users are more than iOS users.

If your app needs the users to pay, the better option would be iOS users as they rank higher up in in-app payments compared to Android users. If you need to build your app across multiple platforms, it is safer to build it on a single platform at a time, giving you time to analyze what you can improve and what you should avoid on the other platforms.

4. Not Considering Your Target Audience

Limiting your target audience can grow your app. An example of such a technique is from Snapchat, which was built for a certain audience. Snapchat has seen phenomenal growth since inception. It is important to analyze your app’s target audience and make the app’s features in line with their cultures and habits. When the audience relates to the app, they are more inclined to uses it. Snapchat appeals to the young generation’s love for selfies and fun filters, making it one of the most downloaded apps by teens and young people.

5. Do Not Focus on Downloads Only

An error-prone app fails to stay on the market despite people installing it because marketing the app is very money-driven. When you are developing an app, it is important to remember that the app needs to be useful to the user long after its release. If 10 people who install an app and love its features are much better than 200 people downloading it and 199 uninstalling it and giving negative feedback. To make your app a success, do not focus on downloads, but keep an eye on the app after its release.

6. Do Not Include Too Many features

When a user needs a messaging app that sends and receives messages, that is all they need. When the app starts to give entertainment or money transfer options, the user may just uninstall it and download one that offers what they need and saves them some storage space. Most users have limited storage space on their devices and they prefer installing apps that are actually useful to them. While developing a mobile application, the optimization of an app space is not crucial. Restricting the app to what the user needs allows the developer an excellent opportunity to shrink it to a size users would prefer to install.

7. Do not Ignore App Testing

Testing is the most significant step in mobile application development. Most developers tend to test the app for only a few constraints, making the app’s use slightly limited. If the target audience is about 1.5 million, they test the app for just around 2 million people. When the app user numbers spike, the app keeps crashing and ends up at the bottom of the market.

8. Not Having Timely Updates

If you rarely update, or even update your app too much, users tend to ignore it. The art of rolling out a timely update is one thing that mobile application development companies need to consider if they want to make their app a success. Updates need to address their users’ complaints and include new trend changes, which ensure no competitor can get into your territory and replace your mobile app.

9. Not Having a Market Plan

The right market plan ensures your app gets to the right audience. It keeps them updated on the app’s importance for them, and their importance to the app as well. Marketing an app is more than just gaining initial downloads, but having the users keep the app for a long time.

In marketing, ROI (Return on Investment) is not involved because if you expect instant returns, you may think you have used the wrong marketing techniques. Have a marketing plan that has a fixed target for each stage of the application’s journey from development to the user.

If you make the mistake of thinking your app is perfect can be disastrous. The biggest mobile app platform, Android, is an open-source platform. This open-source means your app developed on it vulnerable to mistakes. If a user addresses any mistakes on your app, they are trying to help you make your app better. While developing your mobile app, you are not immune to making mistakes, but you can certainly reduce the mistakes.

Owning a mistake is the first step in addressing it. Analyze the market and know what you should focus on to give you the best results on your app. When a user points out a vulnerability, they need you to correct the mistake so they can continue using the app. Ignoring their grievances only means they will uninstall the app and look for one that has better features.

Developing a mobile app takes time and effort. A small mistake could bring your hard work crashing down in a matter of minutes. Having a solid plan charts your way in mobile application development, allowing you to ensure the app passes quality checks by answering the whys, whats, and hows. A plan allows you to avoid taking shortcuts, which are a recipe for disaster; and allows you to avoid the trap of developing for too many platforms at once.

Focusing on downloads only, having too many features on the app, ignoring app testing and timely updates also contribute to the failure of an app. No matter how well the app is coded, it may amount to zero if you do not factor in the target audience and their lifestyles. Remember the app is not for you as the developer, so when users give negative feedback, regard it as constructive criticism. The user is giving feedback in line with what they need in an app, and rectifying these mistakes makes the difference in whether your app is successful or not.