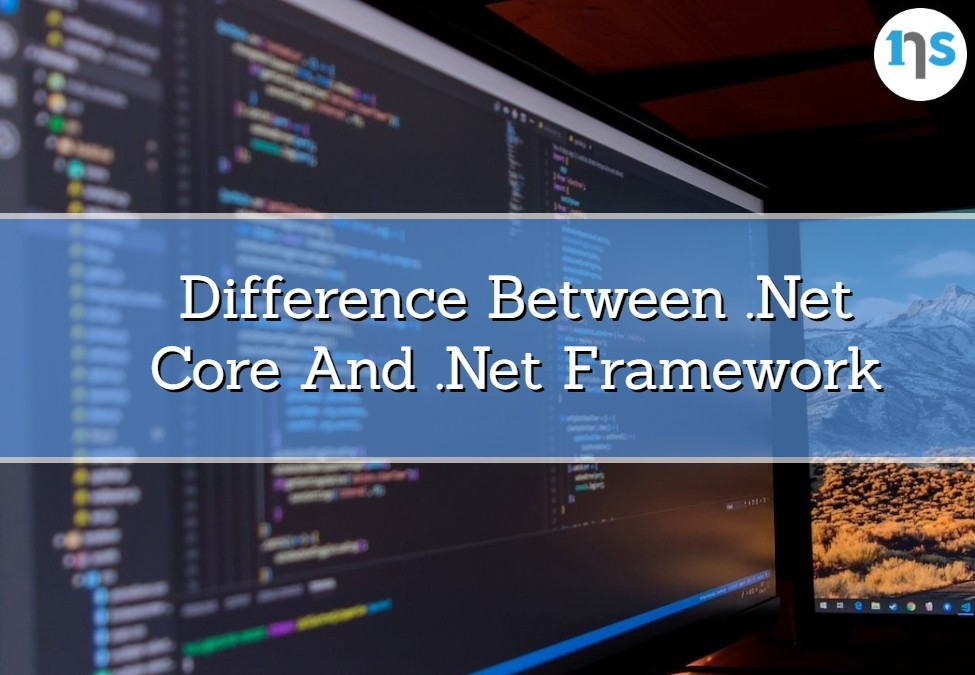 What Is the Difference Between .Net Core And .Net Framework?

You will likely come across .NET Core and the .NET framework if you are considering developing within the Microsoft software development ecosystem. Both have been used to develop and deploy software for different platforms over the years, especially in the business industry. In this guide, we discuss the most important differences between .NET Core and .NET Framework to inform businesses who plan to use either of them in the future.

We’ll also help answer important questions like when and why to use .NET Core over the framework and the advantages and shortcomings of both.

What Is the Difference Between .Net Core And .Net Framework?

.NET Core Is Cross-Platform and Multi-Platform

The most important difference between the two is the fact that the .NET core is cross-platform while the framework is not. You can use .NET Core on any platform be it Windows, Mac, or Linux, and also develop solutions for any of them. On the other hand, the .NET Framework was majorly used to develop Windows-specific solutions using technologies that only work within Windows such as Windows Forms.

The .NET Framework was mainly used to develop and compile programs, games, and websites within Windows using the Visual Basic IDE. Libraries and APIs used within the framework were mostly developed by Microsoft and only integrated with Windows systems such as Windows Server, Excel, and SharePoint services.

.NET Core is Open Source While .NET Framework is Proprietary

One of the most significant differences between .NET Core and the framework is the license they were released under and how are used in the dev community. Microsoft fully embraced standardization and transparency by making .NET core an open-source project. Its source is not only available on GitHub but external developers are free to contribute to its development and add new libraries. .NET Core is managed by the .NET foundation.

On other hand, the .NET Framework is largely still a proprietary project even though its code was released to the public as part of Microsoft’s standardization efforts. Its source code and that of its libraries are available under the MS-RSL license but community contributions are not accepted.

It’s important to recognize the importance of licensing as s a business looking for a software development platform. The prevailing trend in modern times is leaning towards open standards where no one company has control over the inner workings and architecture of a software development platform. Using an open-source platform like .NET Core gives you more control and freedom over what you create with it and how you will use it for the foreseeable future.

Unlike the framework that bundles everything together as update components, .NET Core supports the use of what they call ‘Nuget Packages” which are independent packages of compiled code that can be downloaded and shared when needed. The use of Nuget packages allows developers more control over the dependencies added to their projects which means they can build more lean and fast applications.

From a business standpoint, the support for Nuget packages in .NET Core is a good thing as it allows your team to develop lean applications with minima packages. It also means you can build and host custom Nuget packages and manage how they are shared and deployed in your projects. For example, you could create and host a custome bundle of Nuget packages that can be added to multiple projects in your organization.

.NET Core Must Be Installed Independently

Unlike the .NET framework that comes pre-installed with most Windows systems, developers have to install .NET Core as an independent package or together with Visual Studio. The framework is pre-installed in Windows because it is needed to run most native Windows applications such as Microsoft Word, Excel, and other business software.

NET Core has native support for the development of independently deployable self-contained modules or microservices coupled with the REST API as a gateway and deployment using Docker. Microservice development is not supported in the .NET framework although it is possible to develop a REST API while using other application architectures.

What Is .NET Core?

Dot Net Core or .NET Core is an open-source cross-platform development platform by Microsoft that is used to build highly scalable, corporate-ready applications as well as simple applications and tools. The main philosophy behind .NET Core is cross-platform support which is also its departure point from the .NET framework that only worked within the Windows ecosystem.

.NET Core was created to improve upon the proprietary .NET framework. It has since gone through a lot of changes to its design and new features and project types added. However, most of the features, libraries, and core design language like the use of the independent Nuget packages remain.

The first version of Net Core named .NET Core 1.0 was released back in June 2016 and its support ended in 2019. The decimal-based nomenclature was used for all versions of the development platform with versions 1.1, 2.0, 2.1, 2.2 3.0, and the last of these series named 3.1 released in 2019 with Visual Studio 2019. Since then the .NET foundation dropped the decimal and term “core” from the new versions with the last two simply named NET 5 and NET 6.

The latest stable and long-term release of .NET Core was released in September 2021 and is officially referred to as NET 6 in the documentation and dev community. Its support will end in 2024 although its successor, NET 7 is likely to be released in November of 2022, and NET 8 exactly a year later in 2023. If you are considering developing new solutions with .NET Core, then NET 6 should be your target platform.

You may be tempted to associate .NET Core with native application development, server-side development, or CLI development using C# or F sharp and native libraries. However, .NET Core is a vast multi-faceted development platform encompassing practically all of the development technologies released and maintained by the .NET Foundation and the open-source community.

The technologies under the .NET Core development platform include:

.NET Core Blazor- Want to build fast and interactive web interfaces and hybrid applications with Web assembly? Blazor is a framework within .NET Core that lets you do just that and more using C#, .NET Web libraries, and basic web technologies like CSS and HTML. Blazor apps can be server-based on client-based and are quite fast.

WinApp SDK and WinUI– This is a framework within .NET Core that you can use to build desktop applications and their user interfaces.  It is the more modern and much-improved version of windows forms in Visual Basic and other tools that were part of the .NET framework.

ASP.NET Core– a docker-ready framework for building enterprise-ready web applications, web APIs, microservices, online games, cloud services, and other things for the web. ASP.NET Core is one of the more consistent and widely used web frameworks in the Microsoft dev ecosystem.

What is the .NET Framework?

The .NET Framework is a proprietary software development framework created for developers who were creating tools, software, and games targeting Microsoft Windows. It was closed-source and released under a proprietary patent although its library source code was later released under the Microsoft Reference Source License – Ms-RSL in 2008.

The earliest version of the .NET Framework was first released in the 90s as part of the Next Generation Windows Services development framework. Updated versions of the framework were released in the coming years with added features, refined architecture, and an ever-expanding library up until 2019. Version 4.8 was the last version of the .NET framework and it’s not likely that Microsoft will be adding any new features or major updates with the more popular .NET in the picture.

The basic architecture of applications developed under the .NET framework consists of a compiled C#, J#, or VB.NET code that goes through a Common Language Infrastructure consisting of a Common Intermediate Language (CIL) and Common Language Runtime (CLR) engine that does the actual execution.

Modern projects developed within the Microsoft ecosystem use the more modern, cross-platform, and multi-platform .NET Core. It has a modern, transparent and refined implementation of the Common Language Infrastructure and is open source. Only those who are still working on Windows-specific projects developed in the framework and that have to use the framework.  It’s s possible to migrate or port them to .NET 6 manually or using the .NET Upgrade assistant and other tools.

From a user perspective, .NET Framework is an essential execution environment needed to run applications developed using the .NET framework. Some Windows-specific Enterprise Resource Management Systems and Microsoft applications need the framework to run. Most Windows systems come with the framework runtime environment pre-installed although it is possible to download it.

What Are the Advantages Of .NET Core?

As a software development platform, .NET Core holds many advantages over the older .NET framework. Here are some of them:

All the innovation is directed to .NET – By Microsoft’s admission, all present and future innovations will be done in .NET Core and its successors. This means all the features, libraries, and refinements are being done on the new development platform. On the other hand, active development for the Windows-only.NET framework stopped at version 4.8 although support will continue for the next few years.

Support for Scalability- .NET core has better support for scalable, enterprise-ready applications as compared to the older .NET framework.

Open Source- One of the biggest advantages .NET Core has over the .NET framework is the fact that it is fully open source and has a community behind it. For a business, using an open-source development platform has many advantages with licensing transparency being the top one.

Cross-Platform Support– Modern organizations use a myriad of devices running different operating systems and architectures. .NET Core gives you the ability to build once and deploy everywhere because it was built as a cross-platform and multi-platform development platform.

Being cross-platform also means development can be done on all platforms unlike in the past when there were no Linux or Mac OS versions of Visual Studio or the runtime environment needed to deploy applications developed using the framework.

Being multi-platform means that applications can be developed in one platform but deployed across all available platforms. In essence, you can create software using .NET Core in a Windows environment but execute them in Linux, Windows, Mac OS, and mobile. Multi-platform deployment can save you a lot of time, money, and resources as a business in the short and long term.

What Are the Advantages Of .NET Framework?

Stability- .NET framework has been around for many years and has been continually refined and improved by Microsoft in those years. It is, therefore, one of the most stable development platforms for desktop and server application development.

All indications are that .NET Core will likely end up replacing the .NET framework since new feature updates are being directed to .NET Core. However, the .NET framework is still very much a very important part of Microsoft’s development ecosystem by their admission. Support for the most recent version of the .NET framework will continue for several years to come and developers will still use it within Windows.

The most important question you should consider is when to use .NET Core and when it is appropriate to use the framework. As it is today, the .NET Core framework remains the best choice if you are targeting Windows alone especially if you have devices and systems using older versions of Windows. Also, use the framework if you are upgrading software or systems developed using the early proprietary APIs, WCF and WPF as it can be a task to port these into .NET Core without giving up functionality.’

Both .NET Core and .NET frameworks are powerful and well-supported development platforms even though the momentum seems to be going towards .NET Core in recent days. Your needs and preferences will dictate which one to use based on the project you are working on.