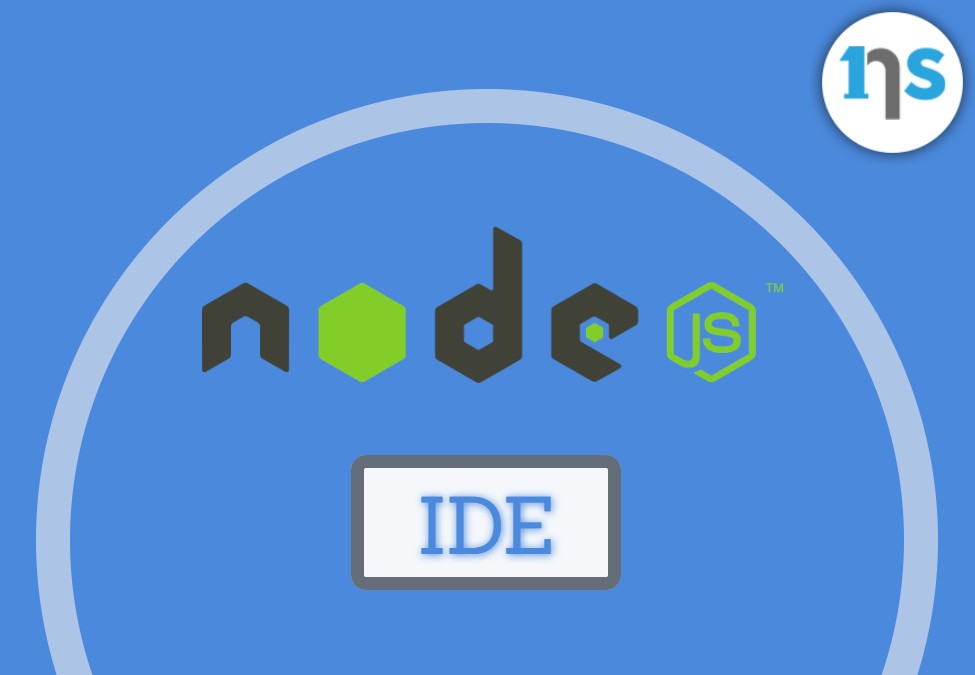 An integrated development environment is an application that developers use to write their code. There are several Node.js IDEs that you can use as a developer. Depending on your skills as a developer, different IDEs are easier to use for different programming languages.

There are different types of IDEs that developers can use depending on the programming languages they are using and the type of applications they are developing. There are IDEs for mobile application development, language specific IDEs and multi-language IDEs.

One of the popular frameworks used by developers for backend development is Node.js. It is a free JavaScript framework used to develop network and server-side applications and can run on diverse platforms.

To get the best out of Nodejs, you will need to use certain IDEs.

Are you struggling to select the right NodeJS IDEs for your application?

Which one is the best and completely free IDE for Nodejs development?

Here is a list of the best and completely free to download IDEs that you can use for Nodejs development. 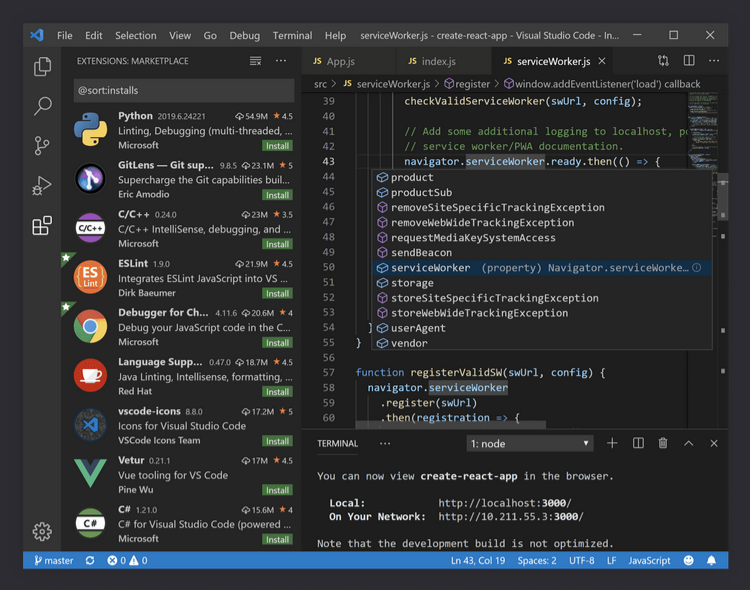 Visual Studio Code is a free, popular, lightweight and dynamic IDE for programming. It is developed by Microsoft it is free to use and easy to download. It runs on all operating systems and automatically supports Nodejs.

VSCode as it is popularly known has hundreds of plugins to allow developers to write code in multiple languages. It also allows for Git integration right from the IDE, has an inbuilt Command Line Interface among other features that make it one of the best Nodejs IDEs.

Atom is another lightweight, open-source IDE with Nodejs development capabilities already built-in.  HTML, JavaScript and CSS are also already integrated into Atom when you download it onto your device.

IntelliJ IDEA is a lightweight and versatile IDE made by JetBrains.

To start Nodejs development on IntelliJ, you need to download the Nodejs plugin. Many Nodejs developers prefer IntelliJ since it allows them to compile, run and debug Nodejs apps in the IDE. It also has a predictive algorithm that completes code for the developer.

With IntelliJ, you can access the terminal on the IDE, use its inline debugger, database tools and assistance for the framework you are working with. 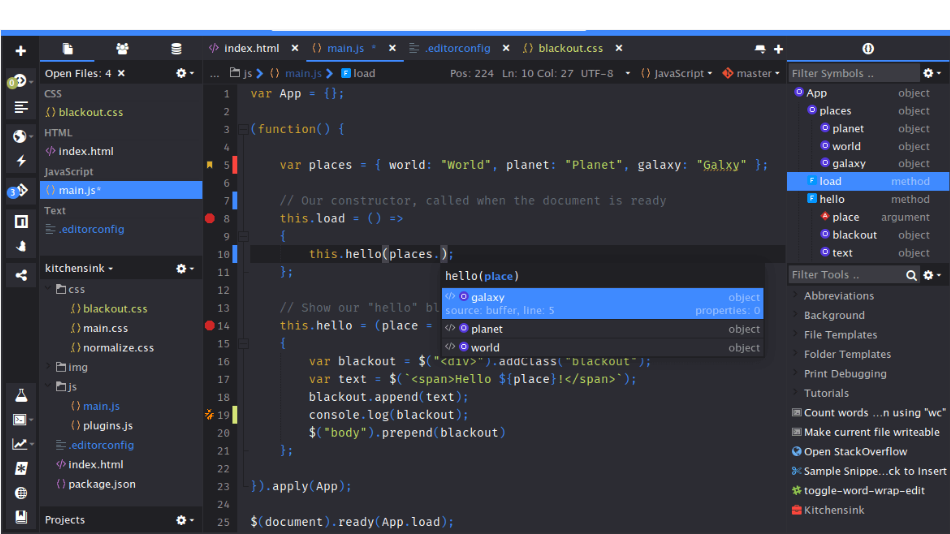 Komodo IDE is another multi-platform Nodejs IDE. When you use this IDE, you can use its built-in browser, create custom configurations and enjoy split and multiwindow editing. Language icons, shortcuts, DOM viewer and graphical debugging are some other features of the Komodo IDE you can use.

Sublime is an advanced Nodejs IDE. It is built with custom components to offer powerful features such as multiple selections, speed in file manipulation, split editing, customization and speedy project switching.  It also has easy API integration features and can be used on diverse platforms.

Webstorm is another popular Nodejs IDE built by JetBrains. It is ideal for server-side application development. Thus, it is an ideal IDE for Nodejs development.

With Webstorm, you can enjoy quick error-detection, code completion, seamless tool integration, and easy navigation for Nodejs and other JavaScript development.

Brackets is a powerful and versatile IDE used mainly by JavaScript developers. Thus, it is ideal for Nodejs development.

It comes with features such as in-line editing, command line integration, run multiple Nodejs platforms and processes. You can also use it for other languages and it also has code completion for speedy programming. 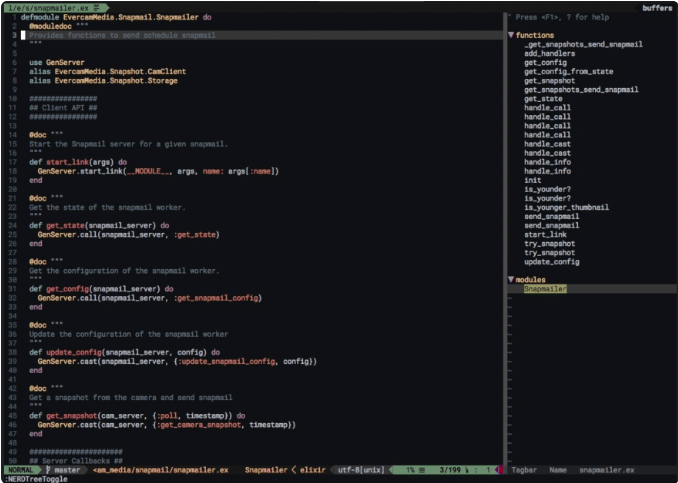 Vim is free for Windows and is also available in Unix and Mac. It is light on your device and delivers superior features. To use Vim for Nodejs or another programming language, you need some time to learn all its features.

What are fast, free online IDEs for Node.js

If you don’t want to use the resources on your device, you can opt for online IDEs for Node.js development.  Online or cloud-based IDEs are as easy to use as IDEs you download on your device. They have powerful features and capabilities and can be used in place of downloadable IDEs.

Here is a list of fast, free online IDEs for Node.js. 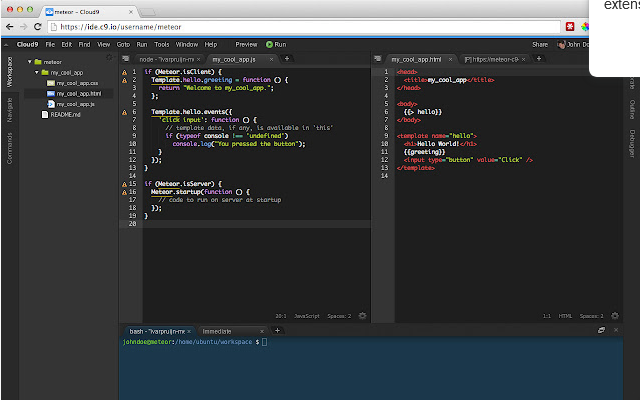 Cloud 9 is a cloud-based IDE. You can use it to write programming languages such as Node.js, PHP among others languages. It is considered one of the best online IDE with a powerful code editor and debugger.  It also has an image editor, live preview and serverless development. It also has an in-built terminal and many other features. 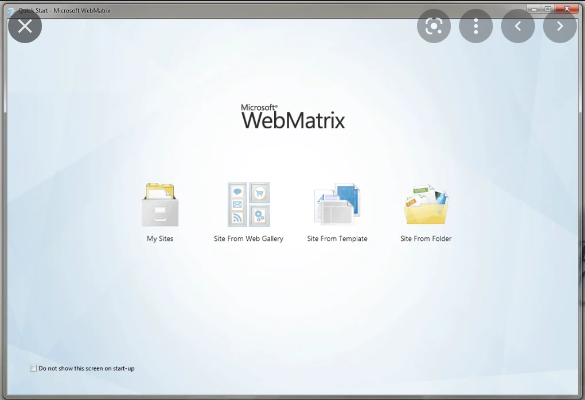 WebMatrix is a cloud-based IDE developed by Microsoft for Windows users. Developers can create robust applications with Node.js using WebMatrix.  It has built-in Node.js templates and databases. It offers cloud publishing and code publishing for quicker development.

Koding is an open-source and cloud-based IDE. You can use it for Node.js projects and other programs such as Ruby and MySQL. Koding is a powerful IDE. If you are working as a team, it allows two developers to make corrections on the same line of code at the same time with its multi-cursor capabilities.

While working with Koding, you don’t have any hardware challenges, you can deploy multiple VMs and have seamless support for other cloud services. It is flexible, intuitive, and powerful.

Eclipse is a highly popular cloud-based IDE. You can write Nodejs on Eclipse with a plugin on the editor. You can use code refactoring features, error checking, automatic build, and source code generation. You also have Maven and Git integration when working with Eclipse.

What is the most recommended node.js compatible IDE?

As you have seen, there are several IDEs you can use for your Nodejs development. Some are more preferred to others. When it comes to picking one IDE over another, developers check for comfort, ease of use, and extra features such as Git integration and lightweight on your device of choice.

For the cloud-based IDEs, Eclipse is the most preferred and recommended Node.js IDE. It is easy to use and understand. It is predictive and with an automatic build. Eclipse IDE has been in existence for years and has been used by many developers over the years. It has been improved over the years to become the most popular cloud-based Nodejs IDE.

For a desktop Nodejs IDE, Visual Studio Code is the most popular and most recommended. It is a flexible and superior IDE. It is free to download and use. It has an in-built terminal and Git integration. It also has numerous plugins and extensions for ease of use with other programming languages.

Which IDE is lightweight for Node.js?

Developers need their devices to work at high speeds at all times. For this to happen, the IDE used needs to be lightweight enough to allow for speed and accuracy.

Depending on your device specifications, different IDEs will be heavier or lightweight than others. The most lightweight Nodejs IDE is Vim. It works with all operating systems. Although it has a steep learning curve, once you know how to navigate it appropriately, your coding time will be enjoyable.

Vim has numerous features which make it a superior IDE to the rest.

Which is the best IDE for NodeJS and ReactJs

Visual Studio Code, Vim, and Sublime Text are some of the best IDEs you can use for both NodeJS and ReactJs.

When choosing an IDE for whichever language you are coding in, consider some of these aspects of the IDE. First, consider its usability. Check that the user interface is one you understand or you can understand easily.

If you code in multiple languages, you need an IDE that supports all the languages that you are proficient in. You don’t want to change IDEs every time you are working with a different programming language.

Can we use Eclipse for Node JS?

Yes, we can use Eclipse to code NodeJS applications.

Eclipse is one of the most popular NodeJS IDE with many users. If you have a large Nodejs project with multiple developers working on it, Eclipse is the best IDE you can use.

Compared to many IDEs, Eclipse is a traditional and futuristic IDE for Nodejs projects. It is an open-source project that is regularly updated and properly maintained. It is cloud-based and provides a perfect developer environment. It has both Git and Maven integration.

In addition, Eclipse has a RESTful API server and fast runtimes. This allows the developer to work accurately and fast. It also has plugins for assembly development, refactoring, and key binding.

Anyone can use Eclipse IDE if they like. It is free and easily available online. It is recommended for all Nodejs developers.

What are some good projects to start Node.js with?

If you are new to Nodejs, there are some projects you can start out with.  These are projects through which you will learn Nodejs and implement everything you know about Nodejs.

Some of the best beginner Nodejs projects include a chat application, a personal website, a web scraping tool to get you Nodejs jobs among other beginner level projects.

Regardless of your programming skills, every time you are working with a new language, it is essential to work on several projects. They help you to test out the new concepts you have learned and to understand the new language better.

Nodejs is an open-source server-side framework. It is easily installed in Ubuntu OS devices. Once it is installed, you are ready to start on your Nodejs projects.

Nodejs is preferred since it is a lightweight framework. thus, it compiles faster on any IDE that you use. As a developer, fast compiling code makes it easy and enjoyable to build applications. You can spot and correct errors quickly as you go. It is also supported by all major operating systems a developer may use.

Installing Nodejs in Ubuntu is an easy process. As an experienced developer with good command-line skills, you can download NodeJS into your Ubuntu device in a few easy steps.

To start working with Nodejs in Ubuntu, check the version of Nodejs in your device.  On your terminal enter node.js -v to check the version. Depending on the tasks at hand always use the latest version of Nodejs. Also, install and confirm that you have the latest Node.js modules and packages. Now, you are ready to start working on your Nodejs projects.

For advanced Nodejs applications, you will need to start your projects by creating a local webserver. If you give your local server a port number, it will listen to the instructions every time it is given and displayed on your device.

You can work with HTML, CSS, and JavaScript to make these simple applications with a server that displays on the screen of your device.

When you are working on Nodejs projects for practice, make sure that you save your projects to GitHub. You can use IDEs with GitHub integration for quick integration. It helps you to monitor your progress as you work on advanced projects.

Are You Confused by The IDE To Choose For Your Nodejs Project?

As a developer, you need an IDE that is lightweight and easy to use in any type of project. You need an easy-to-use IDE and sometimes it may be difficult to choose especially if you are starting.

Sometimes you are spoiled for choice when it comes to choosing an IDE. You can choose a local or a cloud-based IDE. You may want to know the difference and the benefits of each over the other before you pick one to work on.

Having too many choices is one of the factors that contribute to laziness especially for a new developer. If you analyse too many of the ideal IDEs that you cannot pick one to work with which prevents you from making progress with your projects.