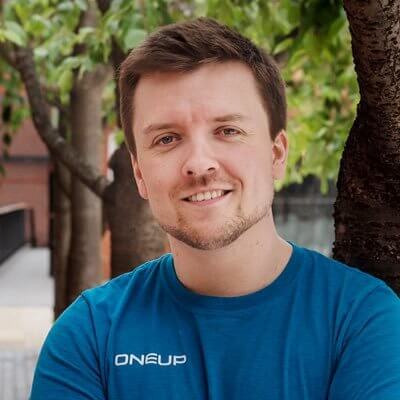 Derry Holt is the CEO and co-founder of OneUp Sales and also a video games developer. After working as a software engineer in the games industry for years, he later channeled his energy into the sales software sector. He tells Geordie Wardman everything about his journey in this captivating podcast that you do not want to miss.

Did you know that you can convert what you are passionate about into a money-making venture? Having been video game developers for years, Derry Holt and James, his co-founder, figured they could use their video game building knowledge to develop business software. They thought about combining the massive data that salespeople generate with equally rich data video games to keep people engaged and motivated.

What began as a simple approach of engaging in fantasy football with salespeople has evolved to integrate a TV display within the system. Listen to the podcast to figure out the connection between salespeople and video games. Derry also gives details on how the OneUp Sales concept operates. You will need to listen carefully to grasp the details.

Along the journey, Derry and James enrolled in an accelerator program in the UK, where they received office space and support free of charge. During this period, their mentors encouraged them to figure out whether they wanted to build a business or become developers.

Derry and James thought about developing a game, but some hurdles stopped them from doing so. What were they? Find out from the podcast. After deliberations, they decided to do something they had never tried before, which you can find out by listening to this podcast.

The duo made up their minds to take time and work on the project. They were also committed to consulting people until they were sure that their target audience would spend money on it. It took the team some years to finally get their idea right and convince people to buy it.

Listen to Derry as he says it all in this podcast and get motivated. Whether you are an aspiring entrepreneur or have just started your company, this podcast will inspire you to keep going regardless of the challenges.

At some point, Derry and James had to lay off all of their staff and start afresh. It was not until 2018 when the company started experiencing some growth. They even formed some collaboration in the UK with recruiting networks. The company experienced lots of growth then. They would late raise some money, but Derry feels like they should have done one thing before raising capital. Find out what that is from the podcast.

According to Derry, there are numerous things they would change were they to do it all over again. Listen to the podcast for details. Derry explains the different phases of growth that they went through extensively. He also tackles the struggles they suffered as well as the plateaus they conquered, and you cannot afford to miss this part.

Derry talks to Geordie about partnership networking. He also discusses the SaaS and recruitment companies they collaborate with. Listen to the podcast for more details on this. Having been in the industry for a long time, Derry understands the recruitment space well. If you are looking forward to investing in the industry, you will benefit from his insights on where to look for customers.

The world is currently grappling with the Covid-19 pandemic, and Derry and his team have experienced some challenges. Listen to the podcast to understand how the experience has been for them. Derry also talks about how they have managed to remain afloat. Are you an aspiring entrepreneur? Don’t miss this particular section of the podcast.

Derry has tremendous plans for the company that he shares with Geordie. Listen in and get the inspiration you need to start your business today.