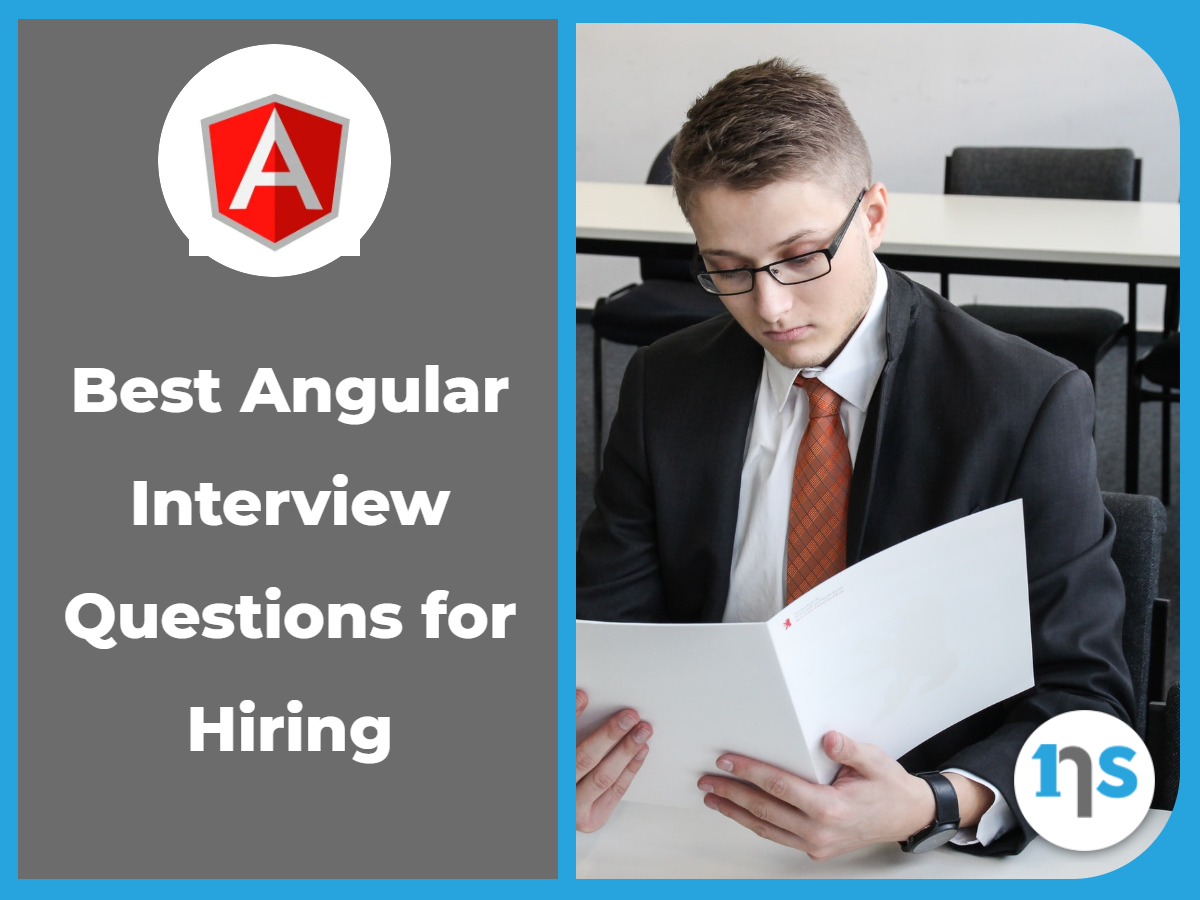 Some of the Best Angular Interview Questions for Hiring Top Talent

If you have a project that needs an angular developer, you have to tactfully approach the hiring process. Proper planning and setting of Angular interview questions need some planning to avoid wasting your time and the candidates’. 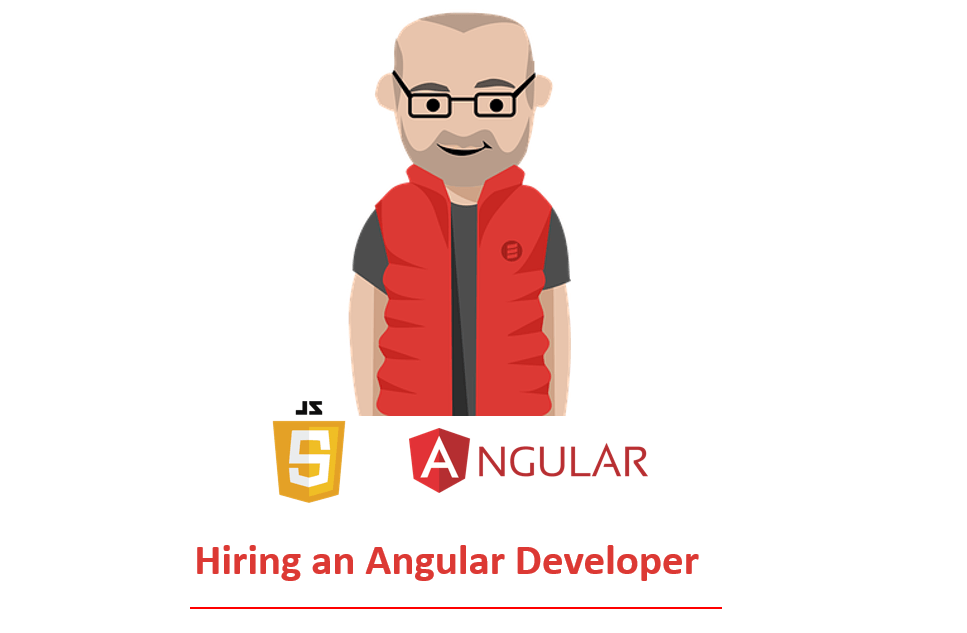 Angular interview questions border on both the candidate possessing technical know-how, such as the appropriate programming languages. Soft skills include the ability to relate well with others, problem-solving capabilities, etc. 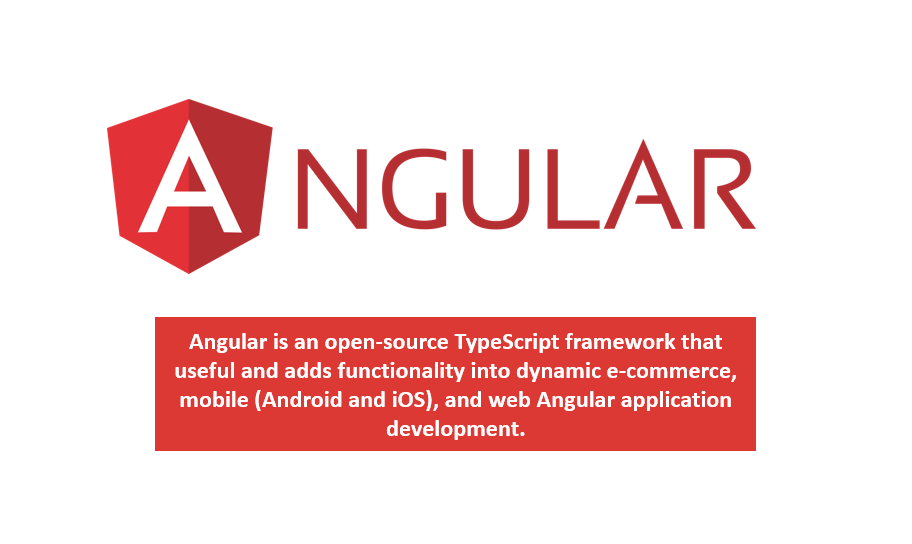 Google developed Angular JS back in 2010 and still maintains it. In 2016, Angular became Angular2 and known as just Angular. Angular is an open-source TypeScript framework that useful and adds functionality into dynamic e-commerce, mobile (Android and iOS), and web Angular application development.

It allows for HTML as the template language and allows for the expansion of HTML syntax for a better app component expression.

Angular is both browser and client-based but is not obligated to communicate to a server for any HTML loading. Angular is fast and allows for reliable and quicker website rendering. Angular is self-sufficient and has several in-built tools such as routing, form validation and state management solutions, with its editing tools including Aptana and Sublime Text.

A dynamic and responsive web page can be created by Single Page Application (SPA)without page reloads using HTML and AJAX.

The Angular project set up is done via Angular Command Line Interface (CLI), and the rendering for the server-side cone via Angular universal. The app development and unit tests are simplified in Angular by the MV and MVC frameworks. Angular is the cornerstone for many famous web apps such as Freelancer, Google Express, Radio.com, Eat24, etc.

What Does an Angular Developer Do? 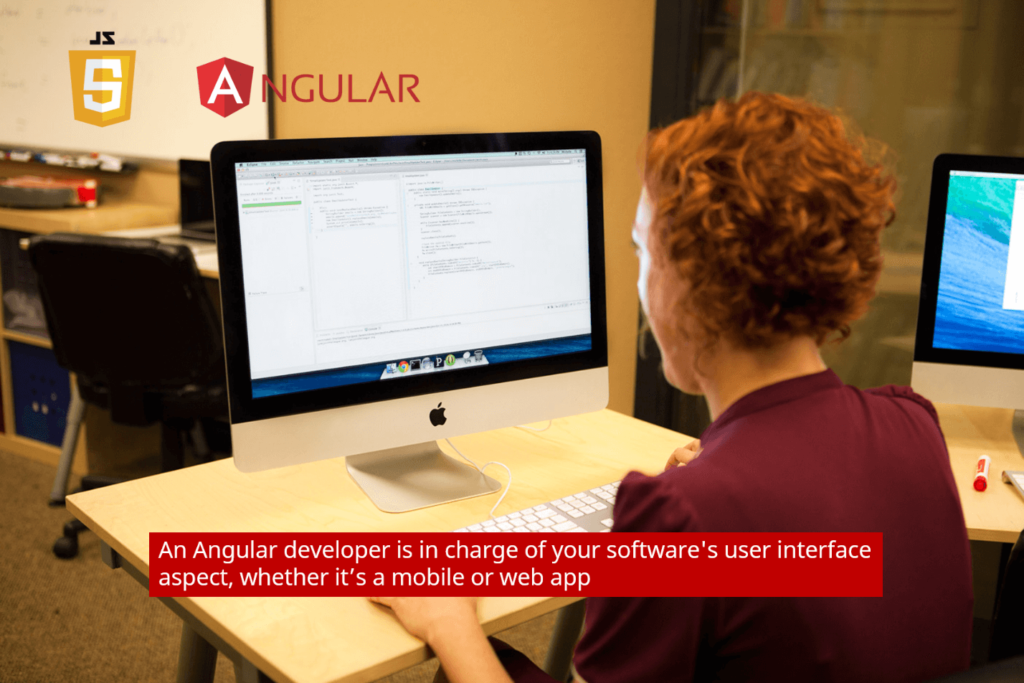 An Angular developer is in charge of your software's user interface aspect, whether it’s a mobile or web app. The developer uses varying frameworks, so he or she needs to have the relevant technical and soft skills.

Angular developers are, in essence, JS developers who have more advanced knowledge of software development concepts. The developer’s main job is to work on the software's client-side aspect and create user interfaces (UIs) for web apps and pages. The Angular developer also creates components and modules, which are fundamental concepts of creating dynamic software.

Skills an Angular Developer Should Possess

An exceptional Angular developer, as earlier mentioned, should possess technical and soft skills. Some of the technical skills include:

2. Good understanding of the Angular Framework

The programmer must have an exceptional understanding of the Angular framework and all its related concepts. Google updates the Angular framework regularly, and all Angular developers must keep updating themselves with the new versions. The developer must be familiar with Git Able, npm and RxJS, and perform wireframe translations to front-end codes.

The Angular developer you will hire needs to have an excellent command of TypeScript, which is a superset of JavaScript, and in which Angular is written in. TypeScript has very few bugs and underwrites excellent and robust typing.

The Angular developer also needs to have some experience using RESTful API, including HTTP requests to PUT, GET, POST and DELETE data. The hired developer should be capable of adequately reading and applying API documentation.

Node and Web Pack constitute of adding features to Angular, further smoothening the development process. Any developer with this knowledge has a head start on those developers who do not.

Soft Skills the Angular Developer Should Have

It does not make sense to hire an Angular developer who has an excellent resume and technical skills but lacks working with others or has poor judgment skills. Here are some of the top skills you should look out for:

Your developer must have keen attention to minute details. This way, his or her code writing is top of the game. The attention to detail allows the developer to pick up small errors in code, which saves a lot of time later.

An Angular developer can be in either of three types of experience categories: 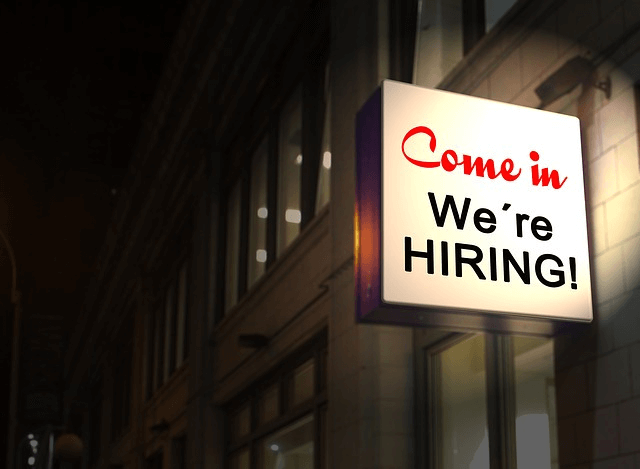 When you know what to look for in an Angular developer and put out your job post on different platforms, it is time to set the interview questions. These questions need to bring out the technical and soft skills of the candidate. You need to prepare AngularJS interview questions as the skills and knowledge are also important.

The questions also depend on whether you need to hire someone who has only basic skills and gain experience on the job in a team environment or a well-experienced developer. Here are some questions and the answers you can hope to get from the candidates.

1. Explain the Difference between Angular $ Scope and Scope

$Scope object implements the DI (Dependency Injection) concept, while Scope is for directive linking. $ScopeProvider provides $ Scope, which is injectable into directives, controllers, etc. Scope can be like a function parameter name and others.

2. What is Data Binding?

Data binding is Angular’s core concept, and it defines the communication between DOM elements and a component. This communication makes it simpler to define interactive apps without having to worry about data push and pull. The four forms of data binding differ in the data flow, namely Property, Event, Interpolation and Two-way data binding.

Routing in Angular is used when a user needs to navigate to separate pages in the app but still wants it as a SPA (Single Page Application). An Angular router helps the user create various URLs for independent content in an app. The ngRoute module enables the user to access different apps' pages, eliminating the need to reload the entire app.

4. Explain What Angular Ivy is in Angular

A larger part of Angular is the compiler, which takes the HTML and generates the needed JavaScript code. Ivy is the rewrite of this compiler and the runtime, which enables developers to:

The Angular AOT (Ahead-of-Time) compiler does an excellent job of pre-compiling app components and their respective templates in the building process, allowing them to launch faster because:

5. What is a Component Decorator?

The decorator's main point is adding metadata to the class that will direct Angular4 on class processing. A decorator is a function that modifies JavaScript classes. Angular contains many decorators, which attach metadata to their classes, allowing it to tell what the classes mean and how they should function.

6. What is the Factory method in AngularJS?

Factories carry out a module pattern where we use the factory method for generating an object, which is utilized for model building. A new object is created in a factory, the method object returned, and the function added as properties.

7. What are templates in Angular?

A template is an HTML view whereby the binding controls display the data to the Angular component properties. Templates are defined inline via the template property like:

Templates in AngularJS are a rendered views containing data from the model and controller. This could be a single file such as index.html or several views in a single page that uses partials.

A directive is a crucial concept in the Angular framework and is used for HTML syntax extension. A directive can either be a predefined(standard) or custom directive. Types of directives: 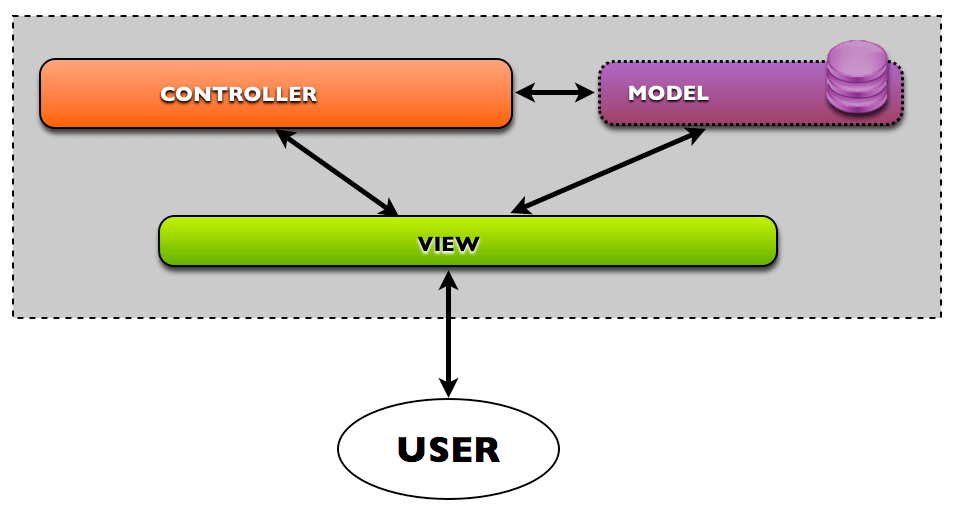 MVC or Model View Controller is a definition for a software design pattern that develops web applications. An MVC is made up of:

The ng-model directive binds AngularJS app data values to the input controls of HTML. It creates a variable that is usable with the HTML page and inside the container control, such as div, which has ng-app directive.

2, Components, templates, modules, etc., are Angular’s primary building blocks. All these are based on Nodules that give the components a compilation context. An ngModule class details how the app pieces fit into each other. Each app has at least a single ngModule, which is the root bootstrap for launching the app.

In the example above, the appcomponent is the root module for the app Angular builds and inserts it inside the index.html page.

The Angular concept is built on Components. These components follow a tree-like structure, with the app component being the root component, explained as logical pieces of code and a subset of directives.

Components in angular 4 have the following options:

This is a container, which groups together all related components. In the app module, the default module in an app is the app module.

12. What is the HttpClient useful for?

For an Angular app, HttpClient is written as Http API. It provides observable APIs, improves error handling, testability, typed request and response objects. Request and response intercepting, etc. The HttpClientAPI lies on the XMLHttpRequest interface that the browsers expose.

13. What is String Interpolation in Angular?

String interpolation in Angular 2 is a unique syntax, a better and more efficient property binding alternative. It displays data on the HTML template and allows you to make alterations on the component.ts file, and fetches data on behalf of the HTML template. A String Interpolation syntax is found inside double curly braces {{}} and is also known as a moustache syntax.

The () or subscribe function in Angular 2 defines how to obtain messages or values for publication. For executing specific observables, create notifications via the subscribe method.

15. What is the AngularJS Digest Cycle?

This is the cycle that underpins Angular data binding. For every digest cycle, Angular compares the previous and newer versions of the scope model values. This cycle is automatically triggered but can be manually activated via $apply ().

16. What is $rootscope in AngularJS?

17. Name and explain are the core directives of AngularJS.

With package. json, it is much easier to manage dependencies in your project. You can use details such as the language, version, etc. For instance, if you use TypeScript, you can mention it and the particular version, i.e. package. json. Other examples include tsconfig. json. json or metadata. json, etc.

19. What are Lifecycle Hooks?

The different filters used in AngularJS include:

21. Explain the Difference Between a Constructor and ngOnInit?

The difference between the two is that ngOnInit is a lifecycle hook and runs behind the constructor. Input initial values and component interpolated templates are available in ngOnInit, but not in the constructor. The significant difference is the way ngOnInit affects the code structure.

22. Explain the Major Difference Between Agular and JavaScript Expressions

Hiring an Angular developer is much more than just an interview. You have to have in-depth knowledge about the Angular framework before you attempt to interview the candidates. No matter how many tutorials you try to watch or read, you cannot ace this process if, you have zero experience or technical skills.

Outsource the hiring process if it is too much to handle. This way, you will get a top-quality angular developer who will build excellent software.