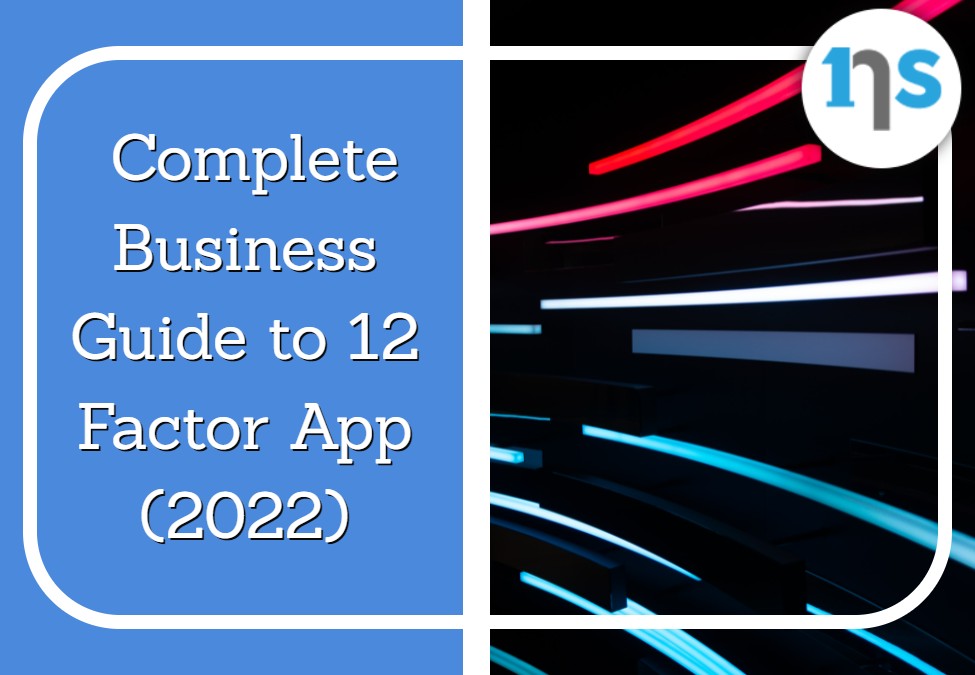 One of the biggest challenges businesses experience when building applications is how to design them to cater to their existing and future user base. Business apps should be easy to deploy, scalable, secure, easy to update, gentle on resources, and platform-agnostic. Adam Wiggin’s 12-factor app methodology is a solution to build robust business cloud apps that meet all these conditions.

In this guide, we explore the 12-factor app methodology in detail. The aim is to provide clarity and demystify some of the jargon that often acts as a barrier to businesses that want to use this approach to build, deploy and maintain apps. At the end of this guide, you will be ready to adopt the 12-factor app methodology on your next business app project.

What Is The 12-Factor App Methodology? 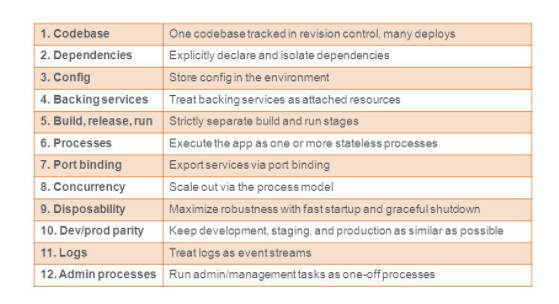 Adam Wiggins, the co-founder of Heroku, created the twelve-factor app methodology. It is a collection of the appropriate practices for developing, apportioning, and redistributing the cloud platform.

This methodology is known as the twelve-factor app because it gestures 12 different guidelines that enable developers to design a scalable and understandable SaaS or web application. These standards result from the knowledge and information acquired through the distribution of various Software as a Service apps over the cloud.

Why should developers follow the 12-factor app methodology? Failure to follow these principles could expose you to the same errors that senior developers made. In the end, you will waste lots of time trying to solve structured issues. Adopting the 12-factor methodology will help you leverage the tried and tested experience to save time.

What is the Twelve-Factor App?

The twelve-factor app is a SaaS development technique that leverages declarative formats for configuration automation.

It reduces the cost and time new developers spend on a project and features a clear contract with the core operating system for maximum portability. This methodology is applicable for redistribution on advanced cloud-native platforms, reduces diversity between production and redistribution, and facilitates continuous deployment for enhanced agility.

The twelve-factor app technique offers scalability without changing tools, architecture, or development practices. Further, this technique is not limited to any specific database or programming language. It’s flexible, can be executed on any application, and relies on its backing services.

Building an application based on these factors enables you to deploy more resilient and portable applications in the cloud. It’s worth mentioning that every factor plays a unique and vital role in its prospective practices and structure. Let us discuss these twelve factors.

This principle states that an application version should always be tracked in a version control system such as Mercurial, Bitbucket, Git, and Github. Codebase comes with considerable benefits such as code tracking and code versioning, and promotes cooperation in the development team tackling the same project.

Each project formation should feature its code repo, a copy of the modification tracking database that can be redistributed in different workloads. A codebase is an independent maven repository or a collection of repositories that share root-commit.

The connection between an app and a codebase is usually one-to-one. For example, if there are different codebases it will not be an app. Instead, it will be distributed where each portion of the system will be an application that can easily adhere to this technique.

Sharing the code between applications will be a breach of the 12-factors. While every app must comprise a single codebase, there can be different redistributions on the app.

Many programming languages come with a package system for allocating support libraries. Libraries established via a packaging system can be introduced in site-packages or scanned in the app directory. However, a 12-factor app doesn’t depend on the indicated reality of site-packages. Instead, it acknowledges all dependencies via dependency deposition.

The dependencies principle states that only code relevant and unique to the application’s purpose is reserved in the source management. External products like .NET DLLs, Java .jar files, Amazon, or Node.js packages should be cited in a dependency manifest integrated into the memory at development, assessment, and production runtime. Do not keep artifacts in the source code repo together with the source code.

This principle states that configuration data is introduced into the runtime setting as settings or environment variables outlined in autonomous configuration file systems. Maintaining default settings that you can directly override in code is allowed in some cases. However, state settings like DEBUG dependency management URLs and port numbers should exist independently and be executed upon redistribution. 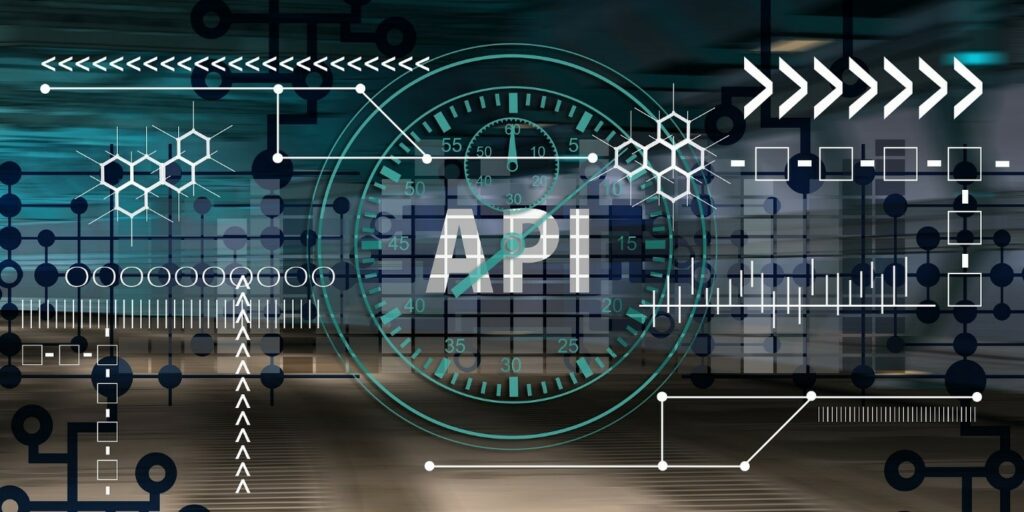 A backing service depicts the services your application relies on for its performance and access via the network. These services include SMTP, datastores, messaging/queuing systems, and caching systems.

The 12-factor app code treats third-party and local microservices as attached resources accessed through locator details stored in URLs or config. It suggests that the application must switch between third-party and local services API by replacing the resource handle without modifying the code.

A codebase is remodeled into a lucrative deployment through three stages which are:

Previously, changing code at runtime was impossible because there was no strategy for transmitting changes to the build stage. However, the 12-factor app methodology made the process possible.

This technique separates these run and build stages strictly. A developer starts by reserving the application in source control before building out its dependencies. After separating the config data, merging it with the build for the discharge stage, and preparing it for the run stage becomes efficient.

Worth mentioning is that every release should feature a unique identification or accruing version number and release timestamp. Remember, every change triggers a new release.

6.     Processes (Implement the App as a Single or Multiple Stateless Processes)

The 12-factor app is deployed in the run environment as a single or multiple admin process. It reserves the data required to be in the state-filled backing service such as a database. The concept, in this case, is to ensure the process is stateless and bar it from sharing any components.

The memory span of the process can be used as a temporary independent transaction cache. To implement this principle, session state information would be the right solution for a datastore that comes with time expiration.

A port, virtual network connection endpoint, enables the system to correspond with various services across the internet. Some of the network ports available in your network firewall come with closing and opening ports that regulate devise access across the network.

Seeing that the app can’t link to the external network without additional setup, Java and DevOps engineers bind ports to determine where and how a message will be discharged and received.

Often, the web apps are implemented in a cloud docker container. However, the 12-factor app is self-contained meaning it doesn’t need the runtime web server boosters in the implementation environment to design a web interface.

The port binding principle states that the consistent use of a port number is ideal for exposing processes to a network. For instance, patterns indicate that port 80 is appropriate for web servers operating under HTTP. The default port for MySQL is port 3306, while port 443 is the default for HTTPS.

The standard of concurrency advocates for managing processes based on their intention and separating them to facilitate scaling up and down accordingly. In the above example, an app is exposed to the network via web servers running at the back of a load balancer. These web servers then use business logic in business services processes running behind their load balancer.

If the strain on the web servers advance, that group is scaled up separately through a process model to meet the prevailing demands. However, if an obstacle arises due to a strain on the business service, scaling of that layer can occur separately.

Supporting concurrency indicates that you can scale different parts of an app to meet needs when they arise. If concurrency is not supported, software developers can only scale the app as a whole.

A 12-factor app methodology-based application should have disposable processes. They should begin and end suddenly to facilitate rapid deployment, higher scaling, and powerful deploys. However, this principle also states that an application’s disposability should not affect or disturb users.

It should be in a position to be replaced or restarted. Integrating disposability in the application enables it to clear all used resources and shut down with ease. It also allows the application to relaunch swiftly. 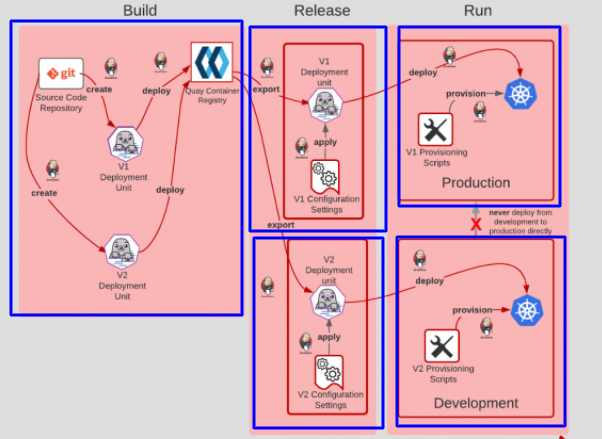 This principle states that all distribution paths are independent but similar and that no distribution bounces into a different distribution target. The above figure illustrates two application code versions.

The V1 version will be released on the production development, while the V2 version is ideal for a development environment. Both versions follow a similar distribution path from build, discharge, and run.

Suppose the V2 code version is declared ready for production, settings, and artifacts applicable to V2 won’t be copied to the production environment. Instead, the CD/CI procedure will follow the proposed build, discharge, and run design towards the new target.

As is evident, Dev/Prod Parity is comparable to build, discharge, and run. The critical difference here is that Dev/Prod Parity guarantees the same distribution process for development and production.

While the 12-factor app recommends that developers take charge of operational responsibilities entirely, this may not be necessary in practice. Today, having one or more DevOps engineers in the development team, leveraging skill specialization, and ensuring team goals are coordinated across operational and development concerns is fast becoming common practice.

Logs provide visibility in the application behavior. In server-oriented environments, they dwell under an output version log file. However, a 12-factor application should not agonize over its production stream’s storage, routing, or try to manage or write logfiles.

Instead, each practical process should create its event stream uncushioned to stdout python. The execution environment monitors each process in the staging or production deployments. The environment is combined with various streams and directed to the last destination for long-drawn archival.

There are different one-off processes (long-running admin processes that should operate in a similar environment as the ordinary long-run procedures of the application) that form part of the app deployment such as data migration and implementing one-off scripts.

The 12-factor app recommends maintaining such administrative processes as the element of the app codebase inside the code repository. While admin processes are different, developers should dispatch and run the application code continuously against the app’s base code, config, and in the same environment to avoid synchronization issues.

Use the same dependency separation strategy on every process type to facilitate the running of off-script. Any programmers building or planning to develop an application running as a service should adopt the 12-factor application methodology.

While there are no universal solutions for web application development, the 12-factor app offers ideal guidelines and practices for Ops engineers and developers to facilitate application implementation, development, and management on cloud platforms.

This technique is a unique blueprint that provides all the necessary steps of redistributing a dependable SaaS product. Developers seeking to develop a SaaS for their businesses should hire professional developers experienced in programming languages and capable of using the 12-factor app technique to redistribute applications on the cloud.

The 12-factor app methodology has been effective for software developers for a decade now. It is critical in developing dependable and scalable enterprise-level applications. This methodology offers crucial guidelines to ease and accelerate software development. Get the service today and improve your development skills.