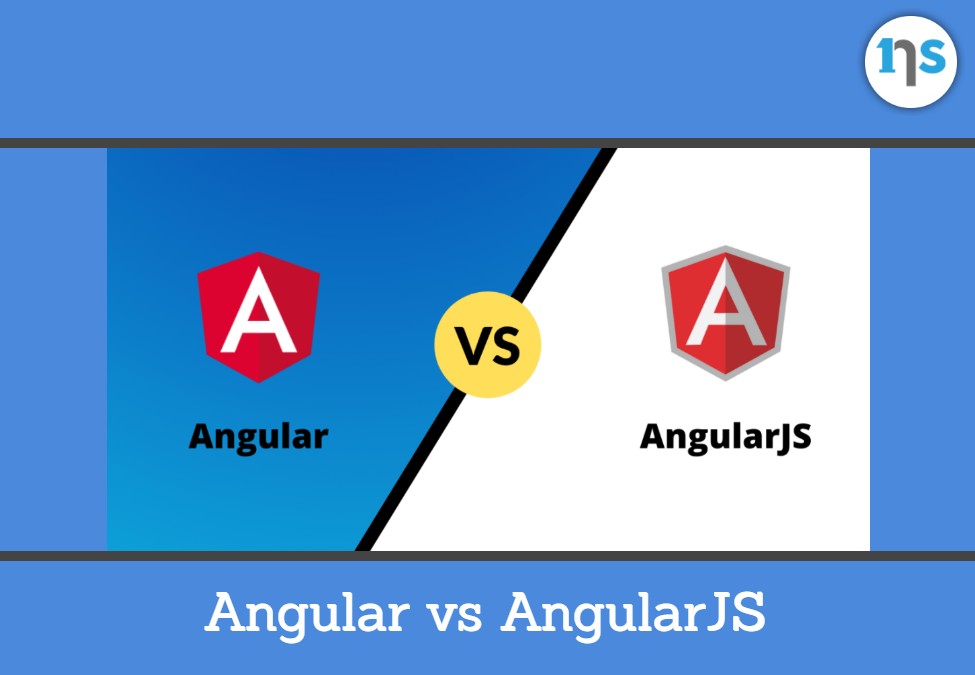 Angular Vs. AngularJS Frameworks- What sets them apart?

Companies are always looking for methods to differentiate themselves from their competitors in today’s digital environments. For each and every successful business, mobile and web applications have become an effective and must-have marketing tool. In addition, frameworks create user-friendly applications.

What is Angular Vs. AngularJS?

Angular is a Typescript-based equivalent to AngularJS for developing dynamic web apps. Today, the enhanced version, Angular, is the most popular. Its benefits include being simple to build, having a sophisticated modularity, and being substantially quicker than AngularJS.

AngularJS, on the other hand, is built on JavaScript and is the title for all version of Angular one. In fact, AngularJS was first released in 2009 and is also known as Angular 1.

The open-source single-page application development platform contains certain unique capabilities, such as the ability to switch from fixed to dynamic HTML. In addition, it comes with a variety of filters and directives.

As per the 2018 StackOverflow Dev Survey, Angular is the second most utilized technology in frameworks, libraries, and other technologies. Angular is a term that encompasses both AngularJS and Angular.

The utilization of AngularJS or Angular 2+ to design outstanding user interfaces was acknowledged by 36.9% of the engineers polled. On the other hand, Angular was named as one of the most dreaded frameworks by 46 percent of respondents in the same poll.

We’ll look at the Angular vs. AngularJS debate in this tutorial, which has divided the developer community since the introduction of Angular 2 in 2016.

Whether you’re a software engineer trying to branch out into web development or a company looking to spread its footprints by launching apps, the AngularJS vs. Angular discussion is bound to pique your attention. So let’s get started without further ado.

What Are the Differences Between Angular and AngularJS?

Angular was a paradigm leap from AngularJS not just because of the programming language but also the underlying architecture and approach to data binding had been modified.

Despite this, programmers and web developers continue to utilize both depending on their needs. Let’s look at the fundamental differences between Angular and AngularJS.

When AngularJS first came out, the animation code was always included in the Angular applications, whether it was needed or not. However, the animation is a distinct package with Angular, eliminating the need to download big file bundles.

AngularJS supports the MVC (Model View Controller) architecture. The business logic goes in the model, the desired output goes in the controller, and Angular handles the rest of the processing. AngularJS generates the model pipelines automatically.

On the other hand, components and directives are the foundation of Angular team. Components are structural directives that follow a preset pattern. They offer applications a more contemporary framework, making it easier to design and sustain bigger apps.

Angular 2+ comes with its Angular CLI (command-line interface). It’s used to rapidly and effectively generate components, services, and even full projects. With dynamic type checking, linting, and other features, you may simply build various versions of the same project for multiple platforms. AngularJS does not have its own command-line interface.

Because the Command–Line Interface tool was launched with Angular, it is not available in AngularJS. CLI (Command–Line Interface) is a fantastic tool that saves time and effort throughout the entire project, from deployment, environment setup, and code creation, maintenance, scaffolding, and testing. 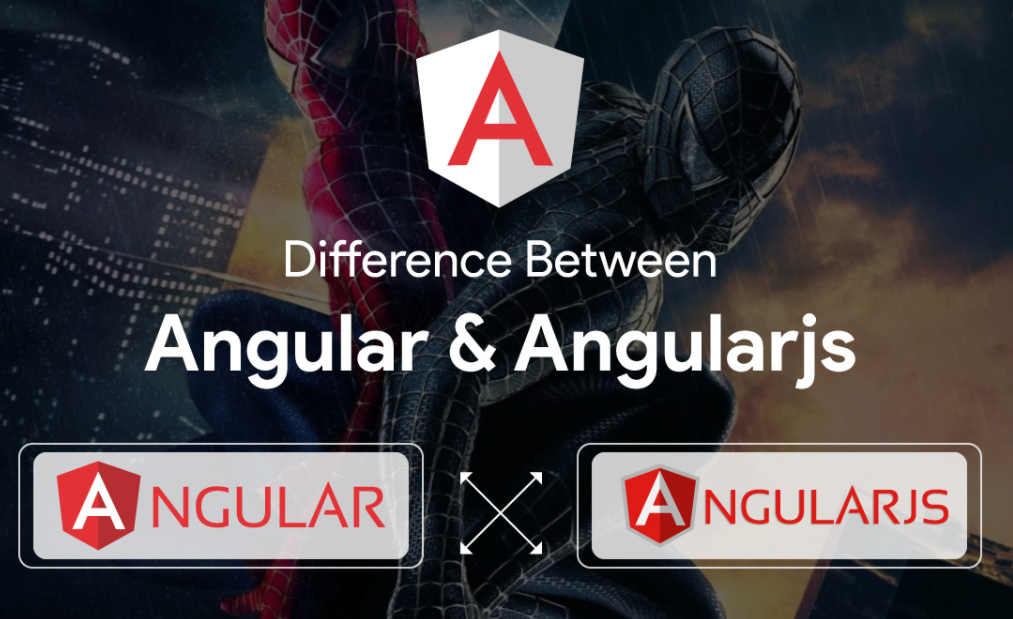 Another key contrast is that Angular’s operation is built on a hierarchy of components, but AngularJS contains a set of directives that allow for code reuse and diverse code development.

In addition, scope and controllers are also used. The standard directives are also present in Angular; however, how each AngularJS framework implements them differs.

Despite the fact that AngularJS utilizes Typescript, the validation form is identical to AngularJS. However, the developers included an extra set of capabilities to allow for more flexible customization. For instance, developers may develop modular verifiers, control access settings, and supervise and manage the process by creating a set of dynamic rules.

Although AngularJS is currently supported, it will no longer be built. On the other hand, Angular has a Semantic Versioning system that allows it to deliver new versions on a regular basis.

AngularJS utilizes scope.$apply() to implement adjustments to data bindings after each event, either manually or automatically.

Angular doesn’t require the scope.$apply(). Angular is always aware when a piece of code ends since it runs in the Angular zone. So it starts the change detection procedure in this way.

Learning Angular and utilizing it for front-end development is a bit tricky because there are several rules you need to learn. On the other hand, its relatively easy to learn AngularJS.

Angular is more intuitive than AngularJS when it comes to handling data binding. When binding an event or property with AngularJS, the developer must remember the correct ng directive.

Keep in mind that the correct ng directive in Angular is to connect an image/property or an event using AngularJS. In the case of Angular, event binding is done using () while property binding is done with [].

Due to their better structure, Angular projects are easier to manage than AngularJS projects. This is especially advantageous in larger applications.

Although AngularJS does not offer mobile development support, Angular does. Unfortunately, in this age of mobile-first computing, this makes AngularJS seem a little antiquated.

AngularJS is significantly slower than Angular. In fact, developers believe that Angular apps may be up to five times quicker than AngularJS applications if developed correctly.

As more complicated apps are produced using Angular JS, two-way binding, which made the original Angular JS popular among web developers, has proven to be its undoing. AngularJS uses a digest cycle to compare each scoped variable’s previous value to verify and implement two-way binding. Because the running of this digest cycle is random, the checking might continue perpetually as the size of the program expands, affecting application performance.

On the other hand, Angular has a fluid architecture, which detects changes through unidirectional data flow, making apps quicker.

Similar to Node.js and React AngularJS employs JavaScript; however, Angular 2 and higher variants use Typescript. Typescript is a Java superset that allows fixed typing during the development process.

(@routeProvider.when) is used by AngularJS to define router info. On the other hand, Angular mimics a directive by using a URL to navigate to the client-side view. The @Route configuration provides the routing information. This makes Angular 2 better than AngularJS.

One thing sticks out between the aforementioned controller and the View in AngularJS: scope. Scope’s job is to transfer data between all of the controller’s components and the View. It is similar to the model in that it also acts as a data source.

Angular does not transmit data in this way, and it no longer requires the controller instead of depending solely on components, as one would expect from a component-based architecture.

The server-side rendering of HTML was necessary for constructing SEO-optimized apps in AngularJS. In Angular 2 and Angular 4, this issue has been resolved.

Angular is well-known for using two-way data binding. In other words, users can see the results of their code in real-time on the application interface. AngularJS, on the other hand, employs two-way data binding; however, due to the digest cycle notion, its speed is poor.

Alongside Angular, one-way data binding was launched. Since it cut the amount of changes the DOM had to pass through, it swapped automatic synchronization for greater speed.

For creating applications and testing for problems, AngularJS utilizes third-party JavaScript tools such as IDE and Webstorm.

Angular gets another point for using CLI to build projects. The extra benefit is that testing takes less time and is more accessible as a result.

What Is Better Angular or AngularJS?

The simple answer is that Angular is the superior alternative if AngularJS is also an option. It is a different matter if it is more or less suited for specific uses. Most modern applications are designed to grow; therefore, if you overlook Angular’s early inefficiencies in developing small apps, it yields a higher long-term benefit.

You can eventually migrate from AngularJS to Angular, but that’s a long process. It is advisable to start with a more contemporary option. So maybe pick Angular, the more future-proof option, since its template continues to be supported and gets new features.

Furthermore, because AngularJS lacks mobile capability, you have no alternative except to utilize Angular to develop cross-platform mobile apps. For instance, Google Mail, PayPal, Upwork, and other well-known apps were created using Angular.

However, keep in mind that Angular has a steep learning curve. If you’re working on a relatively small and uncomplicated application, AngularJS can help you get it done faster and simpler. On the other hand, Angular should be your first pick if you need to build large, scalable apps.

Overall, Angular guarantees a more productive development cycle, which means it is more cost-effective in the long run. When you consider the benefits and drawbacks of each, Angular comes out on top in every key category.

Pros and Cons of Angular and Angular JS? 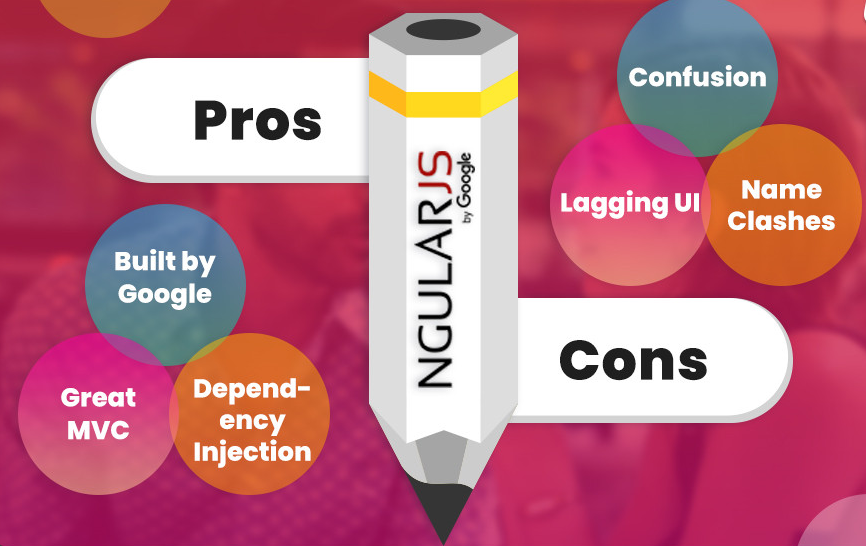 The Future of Angular and Angular JS?

Angular 2 gets various feature requests from both Google and the Angular community and builds a roadmap to prioritize requests based on continual review and evaluation. As a result, angular has a bright future ahead of it, with additional features on the way.

One of the most popular Angulars is Angular 1 (AngularJS). Angular 1 solves a wide range of issues and has several valuable features and capabilities. So does AngularJS have a future? Despite its many benefits, AngularJS development can be a bit challenging. As a result, Google chose to redesign it in 2014, resulting in Angular 2 fully.

While both Angular and Angular JS offer various benefits to developers, Angular is the clear winner in numerous categories. For instance, Angular’s dynamic web and single-page applications are also mobile-friendly. AngularJS code, on the other hand, does not allow mobile apps, which is perhaps Angular’s most significant benefit over AngularJS.